Click photos for full size versions. All descriptions are left to right.


(1) Off the coast of Beverly (2) Relaxing at the pier
(3) A winter sailing Sonar bears down, mid harbor.


(1)Kayaking towards the State Street fishermans' wharf.
(2) Kayaking in late February out in the middle of the harbor.
(3) The rocks and birds off Brown's Island in Little Harbor.


(1) The old Tucker's Wharf Wall... in a snowstorm.
I started to wonder if it could suddenly fall on me.
(2) The Landing Restaurant's underside from a kayak in a snowstorm.
(3) The gangway near Tuckers Wharf.


(1) Just off Skinner's Head, the back of Gregory Street and Abbot Hall.
(2) Shifting the camera slightly to the left, this was the view, same day.
(3) Out in the middle of the rocks off Fort Sewall, contemplating a trip down to Riverhead.
Water temperature 34 degrees, air temperature about 35 degrees. It was snowing.


(1) A harbor yacht in June (2) a beautiful sky
(3) Looking across the Causeway off Devereux Beach.


(1) The Corinthian Yacht Club from just off the Lighthouse.
(2) The CYC's morning gun, minutes later.
(3) In the current at the mouth of the Essex River.


(1) The remains of a structure near the mouth of the Essex River
(2) It looks like a painting at Commercial Street
(3) It's a little rough off the Pleon.


(1) An interesting seawall of Marblehead Neck (2) Just a little fog at Fort Beach
(3) The Lighthouse in the distance.


(1) Hovering over divers in Grace Oliver's (2) Toshiba, the
Around The World racer (3) Under the pier at the Boston. 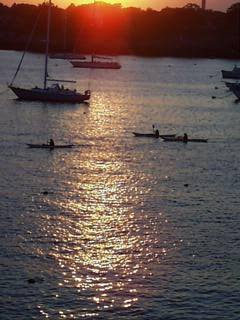